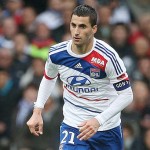 Lyon have issued a hands-off warning to Arsenal for Maxime Gonalons.

Gonalons was on the Gunners’ radar a few months ago, and they are currently looking to find a holding midfielder, with Abou Diaby was ruled out for up to nine months in March after tearing his anterior cruciate ligament.

Speculation has continued to swirl around the 24-year-old’s future, and Napoli have also been chasing him.

But according to a statement on Lyon’s official website, the club have no intention of letting Gonalons go.

“Olympique Lyonnais were very surprised to read in L’Equipe this morning that we would set a transfer figure for Maxime Gonalons and that it would be more than €12 million,” the statement read.

“The club have no intention of parting with our captain and this is a matter of clear strategy, namely the further development of our club around our best young players from the academy of which Maxime Gonalons is one of the best examples.

“The club therefore deny any contact and any negotiations with Napoli or Arsenal and regret any suggestion otherwise, as suggested in this newspaper.”

Gonalons started 35 of 38 games for Lyon this season, and played the full 90m minutes in those matches.