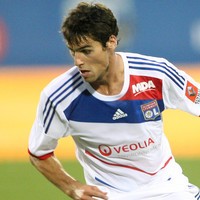 Lyon president Jean-Michel Aulas has revealed that midfielder Yoann Gourcuff could be sold in January.

“He needs to win back his position in the team after his knee injury,” Aulas told Lyon Capitale.

“We hope he’ll be in the squad for the Marseille trip. If he comes back, if he has good offers and if he wants to leave, we could sell him.

“We made a huge investment to sign him when he was the best French player.

“For now, we can’t say this investment hasn’t been economically interesting.”