It has been reported that Olympique Lyon are ready to cash in on Alexandre Lacazette in January. 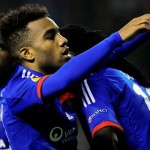 L’Equipe reported that cash-strapped Lyon need to make a big sale during the winter market and Lacazette is the obvious candidate to leave.

The French international striker has been in superb form this season, but OL face the prospect of needing to raise cash quickly in the coming months.

Liverpool, Newcastle United and Arsenal all attempted to sign Lacazette over the summer, before he chose to commit to a new deal.

He said earlier this year: “If there really is a club that is interested in me and I cannot advance with Lyon, it will be discussed.

“But I don’t think it will come to that. The matter will be talked about between men and discussed intelligently.” Arsenal Set To Announce The Signing Of David Ospina