Olympique Lyon captain Maxime Gonalons has admitted that teammate Alexandre Lacazette could be on the move. 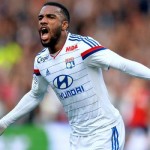 Gonalons remarked: “The transfer window is always complicated. We had contract extensions in recent days, this is important. I hope that Alexandre Lacazette will do the same.

“Have I spoke with Alex? Not too much because these are topics a bit sensitive and specific. We try to be careful. In any case, I try to stay out of it. These are individual cases and what is important is the collective.

“The bottom line is that Alex feels good and brings us all he achieved last season.

“Everyone decides his future, but if everyone could stay, it would be a great thing for this season.”

Lacazette has sparked fresh transfer speculation in the last 24 hours after ‘favouriting’ a tweet linking him with Arsenal last night.

Karim Benzema Keen To Hear From Arsenal In January