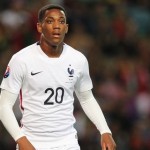 Martial left Lyon for Monaco in 2013 before signing for United last week.

“First, last season, we were forced to sell. I called Monaco; they wanted Martial, the only one we did not want to let go,” said Aulas.

“So it’s been successful, we now take almost €20 million from his transfer to Manchester.”