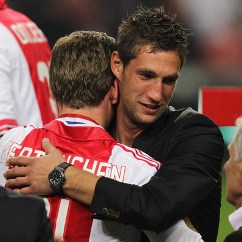 AS Roma goalkeeper Maarten Stekelenburg has denied that he wants out of the Giallorossi.

The former Ajax No1 has been linked with a move away after a poor first season in Serie A.

The 29-year-old Dutch international said on Roma Channel : “I can’t understand where there rumours have come from, I’ve not even been here a year and already they are saying I want to go,”.

“Whoever says this is stupid.”

The ‘keeper has been out of action for the past couple of rounds and is thought likely to miss Roma’s remaining two games of the season too, after ongoing struggles with a shoulder injury.

“It’s hard, I’m doing the therapy, we’ll see what happens in the coming days. Things are better, it’s a problem I’ve carried since around December, I kept playing hoping that it might heal itself but now the pain is too strong to allow me to play.

“Whoever says I’m leaving is a fool, I would like to play all the games here, I love playing, it’s my life. However, the doctors are not sure yet if I can play at the European Championships.”

Francesco Totti : I Will Stay With Roma Forever!