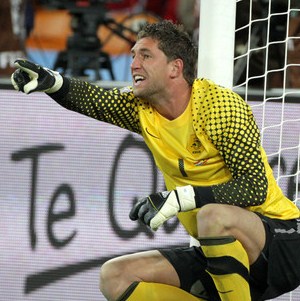 Ajax goalkeeper Maarten Stekelenburg has revealed that he is set to quit the Dutch club and is likely to join Premier League powerhouse Manchester United.

The Dutch international’s current deal with Ajax expires in 2012 and there was much speculation after the World Cup that the Dutch stopper would be sold.

It is reported that the 28-year-old decided to stay with Ajax but admitted that he will not sign a new contract.

The player has now revealed that he is interested in a switch to Old Trafford, but only if Sir Alex Ferguson was to make a move.

Stekelenburg told Dutch sports magazine NuSport : “That is a club where everyone wants to play,”.

“If Jol said he is aware of the interest, I will take notice. (However) my agent and I haven’t heard anything yet.”

“If you look at my contract it has only one year left after this season. Ajax wants money for me and I have no problem with that. Financially, it would be the most interesting to sell me this summer.

“However only I will decide about my future. I want to go to a top league and not to a relegation candidate. Otherwise I prefer to stay for one year longer at Ajax. I don’t have to leave (next summer).”

Despite eyeing a big money move abroad, Stekelenberg insists he won’t be going in January: “I won’t leave this winter break,” he said. “Kenneth (Vermeer) won’t be fit at that time and I don’t prefer a move at that time.

“I started this season at Ajax to battle for the title and the Champions League adventure and I want to be there until the end. I believe in this squad. We can do a lot of beautiful things.”