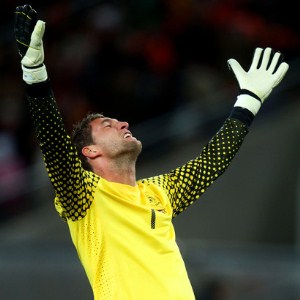 Reports have surface that two Dutch goalkeepers are backing Ajax No1 Maarten Stekelenburg to move to Manchester United.

Stekelenburg has emerged as a transfer target for the Premier League giants as they seek a replacement for the retiring Edwin van der Sar.

However he also has a tentative offer on the table from Juventus.

Ex-Holland and Ajax No1 Stanley Menzo said: “Juventus is a big club, which you cannot just say no to. But Van der Sar, a decade ago failed there.

“Stylistically, Van der Sar is comparable to Stekelenburg. Therefore he should reject Juve.

“Manchester United seems to me a nicer and better club for him.”

“United are similar in culture and style to Ajax. They are a much better option than Juventus.” Arsenal Pushing Man Utd To Include Smalling In Vermaelen Bid