Arsenal legend Ray Parlour has revealed that he earned £330 by betting on himself scoring a goal. 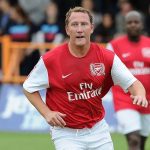 Getting involved in betting has large repercussions for professional footballers these days but back in the day; gambling was perfectly legal for the players.

Former Gunners star Parlour has now gone on to reveal that he once bet on himself to score a goal on his full debut against Wimbledon and won £330, doubling his wages, after finding the back of the net.

In his autobiography titled, The Romford Pele, Parlour revealed: “On 29 January 1992 I made my full debut for Arsenal against Liverpool. My second start came a few weeks after the game at Anfield, in a match at Wimbledon.

“George Graham told me I would be playing in an attacking role, just behind Ian Wright, as a sort of number 10.

“In those days it wasn’t illegal to have a bet on yourself, and I was priced at 33/1 to score the first goal. I phoned my brother up. ‘Jim, put us a bet on, and you need to come to the game, get yourself down there.’

“Jimmy came along with my dad. I scored in the 37th second of the game. Nigel Winterburn took a free kick, Wrighty (Ian Wright) was in the clear and crossed for me to beat their keeper.

“I remember running around in celebration and saying, ‘I won £330!’

“I doubled my wages back then. We won 3–1 and I made my way to the players’ lounge after the game to find my family.

“‘You’ll never believe it,’ they said. ‘We missed the train and were late getting to the ground. When we got in we asked someone the score and they said Arsenal were 2–0 up already. We asked who scored. The young kid Parlour up front.’ And they hadn’t had a chance to put a bet on. They were fuming.”