It has been reported that Paris Saint Germain winger Angel Di Maria has revealed Real Madrid sold him to Manchester United last summer in order to cover costs. 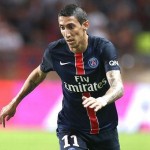 The Argentine international joined the Red Devils in the summer of 2014, but endured a difficult season at Old Trafford, before being sold on to PSG.

“I wanted to see if I could renew and they didn’t want me to. They wanted to cover the costs of the great players they had signed that summer.

“I had to leave by the back door. It wasn’t how I would have wanted.” Nani Ruled Out For One Month With Hamstring Injury