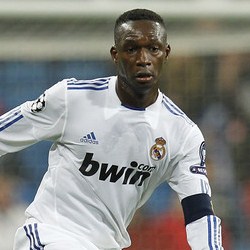 The agent of Mahamadou Diarra has revealed that his client would welcome a move to Napoli.

The unwanted Real Madrid midfielder is being linked with the Italian side ahead of the summer market.

Frederic Guerra told Radio CRC : “Diarra would be very interested in playing for Napoli, because he knows it is an important arena in Italian football,”.

The 29 year old Mali international is currently on loan at French side Monaco and his contract with Real expires at the end of the season.

“I have not yet spoken to Napoli about signing the player, but Diarra is a free agent. Real Madrid paid €6m for him five years ago.

“He will turn 30 on May 18 and is a player who will sign a contract of at least three or four years with a new club.

“It would be a great deal for Napoli, who’d have a world class player free of charge and one who always puts the effort in. He brings an incredible sense of determination to his teammates.

“Diarra would very much like to play for Napoli, as he considers them an important club with ample room for growth.”