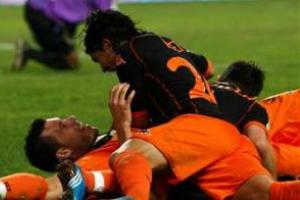 A second-half header by David Navarro gave Valencia a 1-0 win at Malaga in La Liga.

The defender, who was once banned for six months for breaking Internazionale’s Nicolas Burdisso’s nose in a post-match brawl, arrived at the far post to meet Pablo Hernandez’s right-wing cross.

A first half of cat-and-mouse saw Valencia take more of the initiative and create the better chances, while Malaga looked useful on the break.