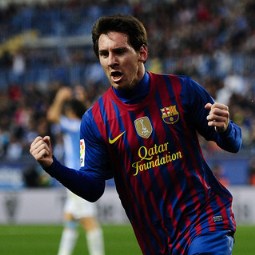 Lionel Messi scored his fifth hat-trick of the season as Barcelona cruised past Malaga with a 4-1 victory at La Rosaleda.

The Argentine forward opened the scoring shortly after the half-hour mark in a pedestrian first half before Alexis Sanchez’s goal three minutes after the interval sparked the match into life.

Goals two and three for Messi on 51 and 81 minutes respectively gave the reigning Liga champions a four goal advantage, before Rondon pounced to give the flustered home side a consolation five minutes from time.

Malaga almost restored a little more pride with a late surge during which Rondon and fellow substitute Seba Fernandez came close to further reducing the defecit, but Messi too was twice denied at the death by Wilfredo Caballero in goal. Liverpool, Barcelona Pleased With First Round Of Talks Over Luis Suarez Sale