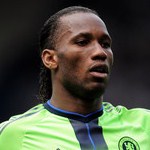 Sensational news are out and it has been revealed that Spanish club Malaga is hot on the hells of Chelsea striker Didier Drogba.

The Daily Star Sunday has reported that the Ivory Coast striker, now age 33, is being tracked by coach Manuel Pellegrini.

It is said that the former Real Madrid boss is looking for a high-profile strike partner for Ruud van Nistelrooy.

Malaga may have only finished mid-table last term but they are now backed by rich Qatar Sheikh Abdullah Al-Thani and he is throwing money at the team in a bid to rival La Liga powerhouses Real Madrid and Barcelona.

Just this week he paid £10million to land Lyon schemer Jeremy Toulalan, 27, on big wages and he is keen on another coup by snapping up Drogba from Chelsea with the promise of a big pay day as he comes to the back end of his career. Ballack Wants To Extend Career In The MLS