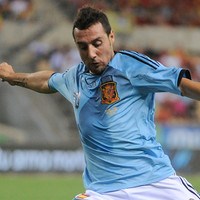 Malaga manager Manuel Pellegrini has revealed that the club have rejected a £15.6million bid from Arsenal for Santi Cazorla.

The Spanish international midfielder has been heavily linked with the Gunners in recent weeks but the Spanish club continue to diffuse the possibility of him leaving for North London with Pellegrini suggesting that selling him for the aforementioned price would be bad business.

“There are always offers made for certain players, when it comes to team restructuring,” Pellegrini told the club’s official website.

“At the moment, we’ve been offered £15.6 million (€20m) for Santi Cazorla; selling him for this amount of money is practically giving him away.

“I don’t think the club has any intention of doing so; I’ve spoken to (owner) Abdullah Ghubn and the Sheikh a lot about this, and they’re not thinking about it.

“I believe it would belittle our intention to play in the Champions League, obviously getting offers for players is always worth considering, but Santi leaving here for 20 million wouldn’t look good to other teams.”

I Would Like To Play For Arsenal – Luiz Gustavo