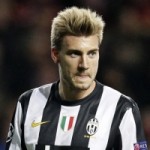 Reports are out claiming that Malaga are trying again for Arsenal striker Nicklas Bendtner.

The Daily Star reported that the Spanish side are back in for the 25 year old Denmark international striker.

A £2.5m deal for the 25 year old collapsed last month because of the player’s wage demands.