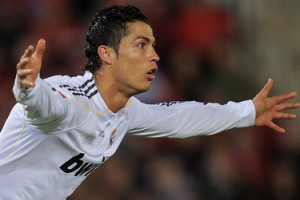 Cristiano Ronaldo struck his first Real Madrid hat-trick as the title hopefuls produced a brilliant second-half display to down 4-1 Real Mallorca and trim the gap on leaders Barcelona back to one point with two games remaining.

Ronaldo, who had previously netted eight braces in Madrid colours but never gone on to claim a treble, struck in the 26th, 57th and 72nd minutes to cancel out Aritz Aduriz`s early opener for Mallorca.

Gonzalo Higuain then added a late fourth for Madrid, putting the Argentinian on 26 for the season – one ahead of team-mate Ronaldo and five behind Barcelona’s Lionel Messi at the top of the scoring charts.

For Madrid, the win was their ninth on the trot away from home and 17th victory in their last 18 league games, and means they are right back in the title race.


Alberto Aquilani Linked With Serie A Side Fiorentina