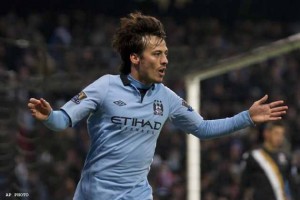 David Silva scored in each half as Manchester City beat Fulham 2-0 in the Premier League on Saturday. The Spaniard put the defending champions ahead in the second minute after Fulham goalkeeper Mark Schwarzer had saved Edin Dzeko’s shot.

A clever pass from Carlos Tevez put Silva through in the 69th to double the lead at the Etihad Stadium. Silva could have completed a hat-trick moments later but shot narrowly wide. Second-place City provisionally moved four points behind league leader Manchester United, who play at Tottenham on Sunday.
Roberto Mancini’s team looked confident from the outset against a side that had won just two of its previous 14 league games.