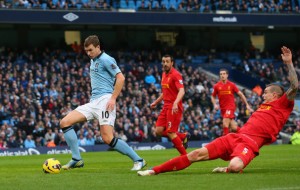 Manchester City now stand nine points behind Premier League leaders Manchester United after they were held to a draw by Liverpool at the Etihad Stadium.

Edin Dzeko gave Manchester City an early lead but a contested strike from Daniel Sturridge against his former club drew Liverpool level before the interval.

City appealed for a foul on Dzeko then waited for Liverpool to put the ball out of play with the striker lying injured. Liverpool, as they were perfectly entitled to do since no whistle came, played on and Sturridge’s finish carried too much power for Joe Hart.

Steven Gerrard added to his catalogue of long-range strikes to give Liverpool a lead they deserved with 17 minutes left but Sergio Aguero’s audacious strike from the tightest of angles as he battled with keeper Pepe Reina gave City a point.


Arsenal are getting tougher – Wenger