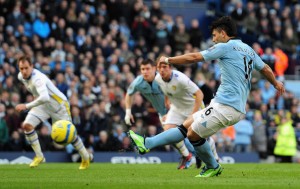 Argentinian striker Sergio Aguero scored twice for 2011 Cup winners City, who eased into the quarter-finals with a confident display that was the complete opposite from their abject surrender in a 1-3 Premier League defeat by Southampton last weekend.

Yaya Toure’s superbly-worked early goal set City on their way against Championship side Leeds and Aguero added a second from the penalty spot.

Carlos Tevez bundled in a third soon after halftime and Aguero added a fourth after 74 minutes.