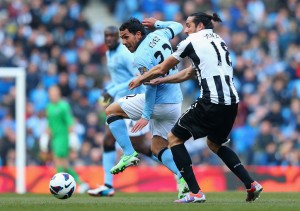 Manchester City moved back to within 15 points of league leaders Manchester United by effortlessly sweeping aside an underwhelming Newcastle.
Carlos Tevez slid in to open the scoring when he took advantage of Jonas Gutierrez’s slack marking before David Silva struck a fierce low drive.
In a dominant second-half display, the returning Vincent Kompany smartly deflected in a Gareth Barry shot.
Yaya Toure then powered through and fired in via a block from James Perch.