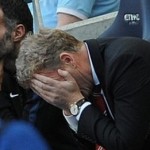 In contrast to the despair of his opposite number, it was a day of delight for new City boss Manuel Pellegrini as he watched the rampant Blues make a powerful statement about their Premier League ambitions.

Sergio Aguero and Yaya Toure gave City a commanding half-time lead and any slim hopes of a United recovery were snuffed out by further goals from Aguero and Samir Nasri within five minutes of the restart.
Wayne Rooney’s late free-kick offered nothing in the way of consolation for Moyes or United on a day of embarrassment that will sit uncomfortably alongside City’s 6-1 win at Old Trafford two seasons ago.