It has been reported that Manchester City striker Stevan Jovetic is up for their derby against Manchester United. 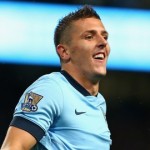 The reigning Premier League champions have failed to win their past three games.

The 24 year old Montenegro international said: “We need to be more determined and we need to score goals, because we are a team that scores more goals than everybody and when we don’t score we have problems.

“It happened last night. I hope the next game we will score again.

“We won this cup last year and we wanted to win it again.

“Unfortunately we didn’t make it but now we must forget, recover well and think about the next game.”