It has been reported that Manchester City have baulked at Juventus’ £71million asking price for French international Paul Pogba. 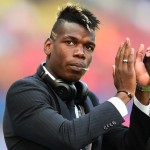 City boss Manuel Pellegrini was believed to be targeting Pogba as a long-term successor for Yaya Toure.

However, The Telegraph is reporting that Juventus’ valuation of Pogba, combined with the 22-year-old’s £12million-a-year wage demands has led City to re-evaluate their interest in the midfielder.

It is understood Italian champions Juventus are eager to keep Pogba in Turin for at least the 2015/16 Serie A season.