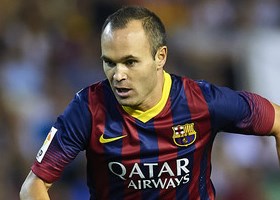 Reports have emerged claiming that Andres Iniesta has rejected a new contract offer from Barcelona.

The Daily Mail revealed that the Spanish champion’s first offer is understood to be well below the expectations of the three times European Cup and two-times European Championship winner.

The arrival of Neymar has upset the natural order of Barcelona’s pay scale with the 21-year-old now the club’s second top earner.

Barcelona have several veterans of their incredible recent history waiting for the imbalances to be put right with new deals.

Victor Valdes : I Don’t Care How We Win The League!