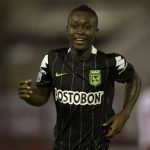 It has been revealed that Manchester City are set to beat neighbours Manchester United to the signing of Marlos Moreno.

The Daily Mirror reports that Pep Guardiola will win the race for the talented Colombian winger who will cost the club £8million.

Moreno impressed for Colombia at Copa America earlier this summer and it looks likely that he will be heading for the Etihad Stadium.

United have also been heavily linked with the Atletico Nacional young gun but it appears as though Guardiola has won his first transfer tussle with new Red Devils boss Jose Mourinho.