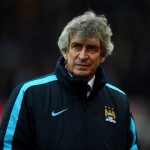 Reports are out claiming that Arsenal have Manuel Pellegrini under consideration to succeed Arsene Wenger.

The Daily Star says Pellegrini, who will be replaced by Pep Guardiola at Manchester City, has had lucrative offers from China, Italy, Spain, Qatar and Russia to secure his expert services and lure him away from his new England home.

But the current City boss wants to stay in the Premier League.

And he believes he has got at least four more years left at the top level of football.

Pellegrini, 62, will be constantly linked over the summer with the Everton post if Roberto Martinez is axed.

And at Arsenal if the mounting pressure on boss Arsene Wenger leads to his exit.