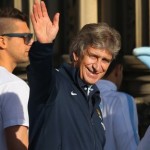 Reports are out claiming that Manchester City boss Manuel Pellegrini has rejected an approach from the Brazil Federation.

The Daily Star reported that the World Cup hosts are searching for a new manager following Luiz Felipe Scolari’s decision to quit.

Scolari resigned in the wake of their woeful end to the tournament and the Brazilian FA made Pellegrini their No.1 choice to take over.

But the Manchester City boss has told them he is not interested and wants to honour his contract with the Premier League champions.