It has been reported that Manchester City manager Manuel Pellegrini was infuriated after his side beat Newcastle United 2-0 at St James’ Park on Sunday. 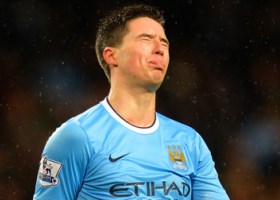 Goals from Edin Dzeko and Alvaro Negredo allowed City to go top of the table but they could quite possibly lose Samir Nasri for some time after he injured his knee when chopped down by Mapou Yanga-Mbiwa in the second half.

Pellegrini said the club would have to wait to assess the extent of the problem sustained by the Frenchman and felt that the Magpies defender deserved to be sent off for his tackle.

The Chilean told Sky Sports : “The kick he made to Nasri was absolutely a red card directly,”.

“Nasri has I think a serious injury to his knee, we will see tomorrow. I repeat it was a direct red card.

“It’s his medial ligament. We will see tomorrow what has happened with him.”