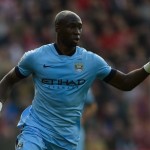 “The thing that is important is to analyse his performance at the end of the season. It is difficult at this moment to decide,” said Pellegrini.

“I agree that he is not doing so well in some games, but in other games he is a sensation and has been very important for us.

“I hope he will continue improving and be very important for us. He is a young player and I ­continue trusting a lot in the way that he plays. Maybe it was not so easy for him to settle here in the Premier League but I am ­absolutely sure he will be a very important player for us in a few years.

“Cristiano Ronaldo came from the same Portuguese league. I think the problem is this league ­because it is very difficult. He is still a young player but one with a lot of experience because he played a lot of Champions League games against ­important teams. Be patient, ­because he ­is a very good player.” Lose And Our Man City Careers Are Over! – Samir Nasri