Reports are out claiming that Vincent Kompany has indicated he will be fit for the weekend’s Premier League action. 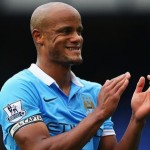 The Manchester City skipper was subbed off late in his side’s 2-1 Champions League loss to Juventus on Tuesday with what appeared to be a calf injury.

However, Kompany has revealed it was merely a precautionary move and will be fine for Saturday’s clash with West Ham United.

Kompany came out of the game in the 75th minute, replaced by summer signing Nicolas Otamendi, only to watch on as Alvaro Morata score an 81st-minute winner for the visiting Serie A champions. I Would Be An Honour To Join PSG! – Yaya Toure