Reports are out claiming that Red Bull Salzburg’s £10million-rated Senegalese speedster Sadio Mane is a target for Manchester City. 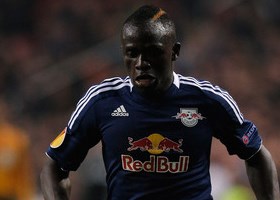 The People reported that City chief scout Gary Worthington watched the 22-year-old flying left winger in Europa League action last week as they move to the head of the queue.

Mane is also on the hit list of several Premier League sides, with Newcastle United keen, and he is tipped to leave the Austrian side this summer.