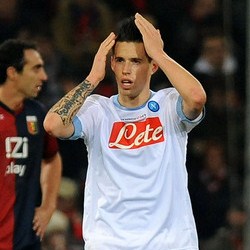 Chelsea and Manchester City are keen on securing the services of Napoli star Marek Hamsik.

Gazzetta dello Sport has reported that after plenty of threats, Napoli president Aurelio de Laurentiis knows this year he will have his resolve tested over the future of Hamsik.

While he has been courted by Premier League clubs, no concrete offers have arrived from England for the Slovakia captain.

But 2011 will be different, with Chelsea and City preparing major bids for the attacking midfielder, who has inspired Napoli to second-place on the Serie A table this season.

“I will not sell Napoli’s jewels,” insists De Laurentiis, but the movie mogul knows he cannot compete with the spending power of Chelsea and City when they come calling for Hamsik later this year.

Anelka Happy To Be Back With Chelsea