It has been reported that Real Madrid defender Pepe is a Premier League target. 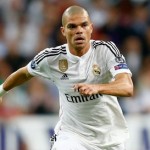 The People reported that Manchester City and Chelsea are monitoring Pepe’s situation at Real Madrid after negotiations on a new contract were halted.

New coach Rafa Benitez is ready to put his faith in Raphael Varane in the heart of Real’s defence and wants to wait to see how the season develops before making a decision on Pepe’s future.

Portugal international Pepe is out of contract next summer and will be free to negotiate with other clubs interested in signing him on a Bosman from January.

That has alerted Premier League champions Chelsea and runners-up City, who are both now considering a move.

There Is No Invincible Team! – Arsene Wenger