It has been reported that Manchester City are expected to announce the signing of Wolfsburg winger Kevin de Bruyne later today. 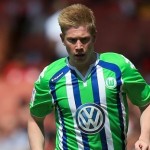 The German club’s sporting director, Klaus Allofs, confirmed a deal is in place for the Belgian to move back to the Premier League just 18 months after leaving Chelsea.

The fee, expected to be £54m, will far exceed the club record amount City paid to Liverpool for Raheem Sterling earlier in the transfer window.

“We will complete everything either tonight or tomorrow,” Allofs told reporters. “De Bruyne is off to Manchester City.

“I explained at the presser [on Thursday] that we had begun talks, those talks have progressed. Now only minor issues remain.”

City’s recruitment of De Bruyne will take the Premier League leaders’ summer spending to well in excess of £100million following the earlier arrivals of Sterling, Nicolas Otamendi and Fabian Delph.