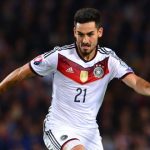 Reports have emerged claiming that Pep Guardiola is working with Manchester City sporting director Txiki Begiristain to get some early summer deals done.

The Daily Mail suggests that Guardiola wants to complete some key transfers before he officially takes the reins in July so he can hit the ground running.

It is understood that Borussia Dortmund midfielder Ilkay Gundogan will be one of, if not, Guardiola’s first signing at the Etihad Stadium.

The German has been heavily linked with a move to Manchester in recent months and it is expected that he will join for around £20million after City and Dortmund agreed the fee, according to the BBC.

Gundogan, 25, is currently nursing a dislocated kneecap he sustained at the beginning of May but will be free to return to training in the coming weeks as Guardiola prepares to assemble a star-studded squad for his first assault on the Premier League.