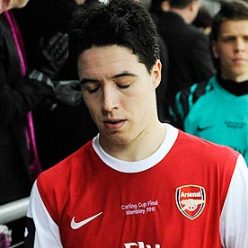 Reports are out claiming that Manchester City and Arsenal were last night locked in talks over Samir Nasri’s £22million switch.

It is said that the FA Cup winners have stepped up their pursuit of the French midfielder, 24, with the big kick-off looming.

And, with Cesc Fabregas Barcelona-bound, Gunners fans are facing up to the prospect of losing both their star men.

Arsenal’s resolve to hang on to Nasri – who has just 12 months left on his contract – has finally softened as they realised cashing in now was their best option.

City were happy to wait until January or even next summer when they knew they could land the former Marseille man for nothing.

Now they are confident they can finalise a deal in the next few days, although the chances of him playing against Swansea on Monday are fading.

Arsenal are holding out for a fee of around £24m, but once they agree, the move is likely to be a formality with midfielder Nasri already happy with the personal terms on offer.