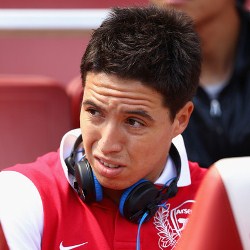 Reports have surfaced that Manchester City are ready to make a new £22 million offer for Arsenal midfielder Samir Nasri.

The Sun has reported that there is growing confidence that Gunners boss Arsene Wenger and his board have accepted they are fighting a losing battle to hold on to the unsettled star.

City officials have been given encouraging signs that Arsenal finally want to bring things to a head and are reluctantly ready to sanction a deal.

There were even suggestions a move could be rushed through by the weekend, giving Nasri an outside chance of featuring in City’s Community Shield clash with Manchester United, who also like the 24-year-old.

The big choice for Arsenal is whether to cash in now on an unhappy Frenchman or lose him for free when his contract expires next year.