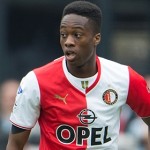 It has been reported that Manchester United and Manchester City are battling for Feyenoord defender Terence Kongolo.

The Daily Star Sunday reported that City believe they could have a trump card in the battle for Kongolo as they have already signed his younger brother Rodney, 16.

But brother Terence has strong links with United boss Louis van Gaal and players Robin van Persie and Daley Blind, as he was part of Holland’s World Cup squad in the summer.