Reports are out claiming that Manchester City are set to beat Manchester United to the signing of Portuguese starlet Venancio da Silva Monteiro. 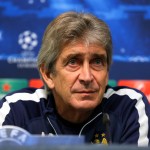 The Daily Mail reported that the talented 15-year-old winger has been at Carrington since April after arriving in England from Benfica.

He was unable to gain the paperwork to allow him to play for United at first but after gaining the all clear has made an impression on Old Trafford staff.

United believed they were close to reaching agreement but it is understood the player’s father is now considering an approach from rivals City and he could sign if negotiations go well over the coming weeks.

I Can’t Do Much About My Situation – Shinji Kagawa