Reports are out claiming that Manchester City are due a windfall should Mario Balotelli be sold by AC Milan. 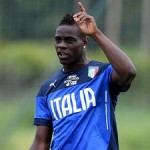 The Daily Star reported that the Premier League champions will receive a £2.5million bonus if Milan sell Italy striker Balotelli.

It is said that Milan have to pay City ten percent of any fee they receive for offloading the former Etihad star, who faces England in the World Cup on Saturday.

The 23 year old Italian international striker moved from City to the San Siro 16 months ago for £20m but Milan want a £5m profit on that to factor in the payment to the Premier League champions.

He would be happy to be reunited with his former Inter Milan boss – Jose Mourinho – at Chelsea. Arsenal have also been linked with a player who will be keen to showcase his talent against the Three Lions in Manaus.