Reports are out claiming that Manchester City are set to offer a massive new deal to James Milner. 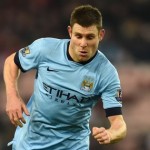 The Daily Star Sunday reported that the England midfielder is out of contract at the end of the season but City have told him a £90k-a-week deal will be on the table by the end of this month.

The new contract would cover the next four years.

If Milner, 28 puts pen to paper, it would disappoint a number of clubs – including Everton, Liverpool and Arsenal – who were scenting a bargain signing.