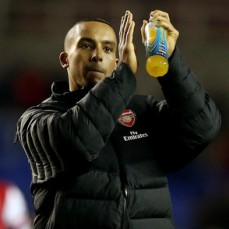 Reports are out claiming that Manchester City are eyeing a Bosman deal for Arsenal contract rebel Theo Walcott.

The Daily Star Sunday revealed that City’s new sporting director Txiki Begiristain is urging his club to make the striker, 23, a priority target.

Begiristain is said to have been an admirer of Walcott since he played for Arsenal against his previous club, Barcelona.

And City could now make a cut-price offer for Walcott in next month’s transfer window – or try to sign him as a free agent in the summer.

They also tried to land Robin van Persie from The Emirates last summer but lost out to neighbours United.