Reports have emerged claiming that Fabian Delph could be the solution to Manchester City’s homegrown player issue. 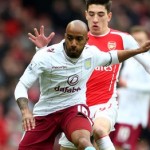 City are in need of English players to meet European requirements and have been linked with a move for Arsenal’s Jack Wilshere.

However, the Daily Mail suggests that City may instead target Delph after the Aston Villa midfielder produced a superb season in 2014/15.

Delph played a key role in Villa’s run to the FA Cup final, where they were soundly beaten 4-0 by Arsenal.

The 25-year old ended the season by flourishing as Villa captain and establishing himself in the English national team.