Reports are out claiming that Manchester City are ready to make a formal bid for Juventus midfielder Paul Pogba. 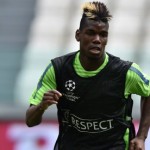 The Daily Mail reported that City were ready to follow up their interest in Pogba on Friday night with a formal offer for the £70m-rated Juventus midfielder.

City played down reports in Italy yesterday that they have lodged a bid of £58m for Pogba but it is understood that contact has been made between the two clubs and a formal offer is likely to follow.

They will face fierce competition from Barcelona, Chelsea and Paris Saint-Germain.