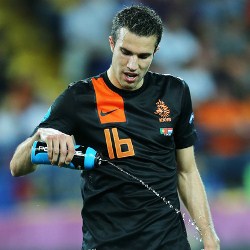 Reports are out claiming that Manchester City are being frustrated in their battle to land Arsenal captain Robin van Persie.

The Sunday Mirror claim that the £25m Arsenal want for Van Persie, if he quits the Emirates, is deemed excessive for a player approaching his 29th birthday – especially when wages of £200,000-a-week are factored in.

Real Madrid and Juventus are also interested in the Dutchman, who has a year to run on his current deal.