Reports are out claiming that Costel Pantilimon is a target for West Ham United according to reports. 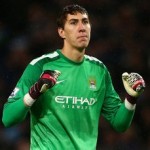 According to the Daily Mail, the 27 year old Romanian international is now a free agent after his deal with Manchester City expired and has appeared on the transfer blueprint of the east Londoners.

However, the speculation is there as the 27-year old searches for more first team action after playing second fiddle to Joe Hart at the Etihad Stadium.