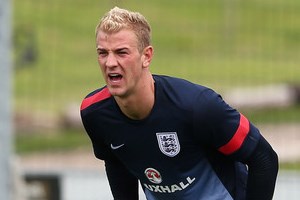 Steele wrote in the Telegraph: “Joe is hurting inside greatly and is desperately disappointed but now is the time for Manchester City and the nation to get behind him.

“I’ve spoken to him since Sunday’s game at Stamford Bridge and he is absolutely desperate to get back out there and nobody wants to put things right more than Joe.

“We are a nation that knocks people down but we’ve got to get around him – that means his manager at City, the coaching staff and he needs support from within the football club.

“This is a big seven or eight months for Joe, with the World Cup next summer, and we need him to be recovering from this dip and showing everyone he’s still in the best in the country.

“Manuel Pellegrini is an experienced manager and it’s not about what he says publicly to back Joe. It’s all about the dialogue they have within the four walls and whatever Pellegrini says to Joe in private will mean far more than words to the press.”