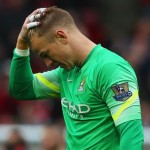 Reports are out claiming that Manchester City goalkeeper Joe Hart says defeat at Manchester United was the worst moment of his career.

“That’s one of my worst in a Manchester City shirt, definitely.

“It’s hard to take. We’ve won enough of them to know how to lose properly though – and we weren’t good enough after the first 15 minutes.

“We let ourselves down and we let our supporters down. I’m hurting from this defeat, there’s a lot of emotion running through me.

“Let’s see how it feels the next day, we’ll think about it and we’ll go again.”