Reports are out claiming that Manchester City are moving for Napoli midfielder Marek Hamsik. 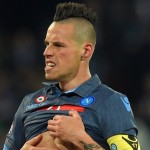 The Sun reported that City are ready to launch a £20m bid for Napoli star Hamsik.

The 27-year-old Slovakian international has been at the Serie A club since 2007, and played 50 games last season, scoring 13.

Hamsik has admitted he would already have left Napoli if Rafa Benitez, now coach of Real Madrid, had remained in charge.

Agent Plays Down Serie A Return For Stevan Jovetic